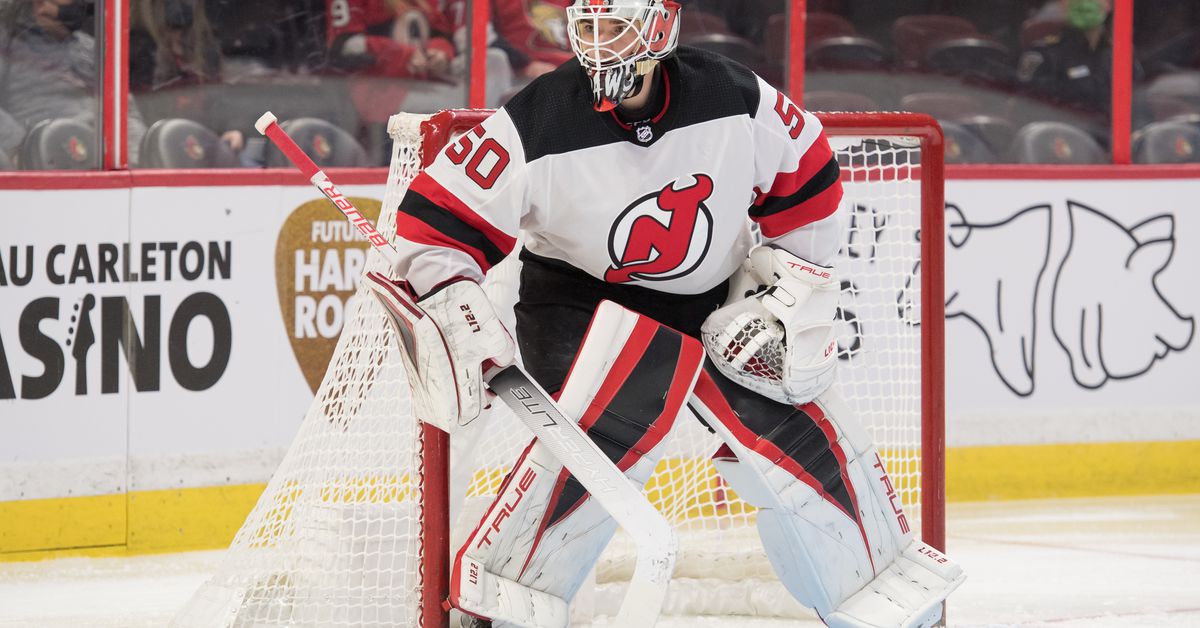 When it rains, it pours.

The story of the Devils 2021-22 season has been a bad goalie and their lack of finishing. And in their first game after the All-Star break, those same issues that plagued them all season continued to plague them as they lost 4-1 to the Ottawa Senators.

The Devils and Senators clashed in the first 1:29 before Ty Smith blocked the puck. The Devils took control of the defensive zone toss and Jesper Boqvist got a wide-angle shot on Matt Murray. The Mercer line did a decent job of pinning the Sens deep as the rookie center fed the puck up front, but no one was there. Dylan Gambrell carried the puck into the zone and snatched it from the side of the net for Ottawa. Pavel Zacha, who had gone from winger to centre, fired on Murray whom he easily gloved for the save. Ottawa took control as Alex Formenton and Connor Brown shot Nico Daws, who moved well into the crease and turned them away. PK Subban, playing his 800th NHL game tonight, shot from the goal post on the ensuing possession.

The Boqvist-Zacha-Vesey line put the puck deep and generated a few scoring chances, but to no avail. The teams back and forth for a bit before the McLeod line made some noise, which ended with Matt Murray covering a loose puck in the crease for the television timeout.

Jimmy Vesey fired a shot that was deflected out of play after the commercial break. Nikita Zaitsev got caught on board Jesper Boqvist to give the Devils their first power play. The Devils won the ensuing faceoff, Pavel Zacha returning the loose puck to Damon Severson, who fed Jesper Bratt. Bratt sent him to the net, Nico Hischier redirected him past Murray and the Devils got an early power play goal to take a 1-0 lead.

The Senators tied the game moments later by tossing the puck. Alex Formenton picked it up and sent it back to Connor Brown who was in the Martyzoid behind Nico Daws. Brown found Nicholas Paul in the high slot and Paul fired him through Mercer and Daws to tie the score at 1 as the Devils were once again caught watching the puck. The first period ended when Tomas Tatar threw the puck out of the defensive zone. All in all, it was a solid first period for the Devils as they mostly controlled the pace of play and had the best scoring chances, but alas, we’re tied after 1.

The Devils applied some pressure to start the second period with Murray fending off a pair of shots from Nathan Bastian after Nico Hischier fed him in front. Jimmy Vesey attempted an enveloping goal that went well past him. Ottawa cooled down and got a few scoring chances on their own as Tyler Ennis put in a powerful move and a defensive zone turnover from Jonas Siegenthaler kept the streak alive, but Daws held on. Formenton came in behind the Devils defense for a breakaway opportunity, but Colton White made a fine play to deny him a clean look.

Ottawa punished the Devils with a pair of goals nine seconds apart. The Senators drove the puck deep and headed for Nick Holden, who shot towards the net. The puck passed Nico Daws for a 2-1 lead, and while there was some contact in front as Mark Kastelic was in Daws’ grid, I guess there wasn’t enough for Lindy to Ruff contemplates a challenge. Ottawa won the tie that followed and Adam Gaudette slipped the puck between Daws and the right post for the 3-1 advantage.

The Hischier line had a decent change as Nico was denied on a power move and Murray stopped Bratt on a captain’s feed moments later. They didn’t generate much else until the last minute when Bratt found Yegor Sharangovich alone, but Murray stopped the pad. Murray also deflected Bastian with a powerful move in the dying seconds as the Sens headed to the locker room with a 3-1 lead.

Daws (and Ryan Graves) fended off a Dylan Gambrell shot early in the third. After a clearance, Daws made a few saves on Gambrell and Watson before the Devils got a clearance. Ty Smith found Sharangovich the other way but Murray turned him away. Jesper Bratt had his knee examined by a coach during a stoppage of play but returned to play.

The Devils didn’t really make a serious push before Ottawa stuck the dagger with 8:02 to go as Connor Brown beat Daws to take a 4-1 lead. Not much happened in the final minutes as the Sens did a good job of stopping the Devils from doing much, and the Sens easily won 4-1.

The opinion of the opposition: Visit Silver Seven Sens if you want to read the Senators’ take on tonight’s game.

A recurring theme I’ve seen on social media during and after the game was that the Devils “deserved a better result”. I’m here to tell you no, they didn’t.

For starters, the Devils continue not to bury their chances. It’s a problem that has plagued the team all season. I thank Matt Murray for playing well in net, but it’s the same thing we’ve seen all year. You’re not going to win if you only score one goal, and none at 5v5. I don’t care how good the fancy stats or expected goals are when the Devils do nothing but shoot shots of long-distance empty calories that are blocked. The wingers haven’t been good enough this season, PERIOD. And if we’re being honest, the Devils were more or less fired up after giving up back-to-back second-period goals. They lost the match on the spot. There wasn’t much in the third period in terms of dangerous opportunities and it’s hard to draw conclusions from what this team has been doing on the ice otherwise. Until the Devils make meaningful improvements to their Top Six by bringing in better wingers, expected goals and Corsi For are just numbers on a spreadsheet that mean absolutely nothing. Not with this team, this system or this coach. Not when the Devils continue to outdo themselves on the boards. Not when they’re botching routine defensive missions.

That brings us to goalkeeping, where Nico Daws was the last to come and try his luck in net. The results weren’t great, allowing 4 goals on 24 shots. And I get it, it’s demoralizing when the team goes out night after night after night and gets bad goalies, no matter who’s in the net and they have no chance of winning. You might nitpick and say that goal or goal wasn’t his fault, but the results are what they are. Let’s say I’m not surprised to learn that PK Subban or Ty Smith were out of position on a conceded goal. You do not say ?

Tom Fitzgerald said the answers were in the room about six weeks ago. We haven’t seen anything since then to suggest any answers are actually in the room. It continues to look like an unhappy, overwhelmed team giving up at the first sign of trouble, which is a direct reflection of Lindy Ruff and Tom Fitzgerald and the leadership they provided. We know the Devils are understaffed. We know injuries are one thing, COVID continues to be one thing. Next sentence, Jack Hughes being on COVID protocol hasn’t all of a sudden made the Devils more competitive or more likely to win tonight. But you already knew that. You know that not having our best players doesn’t help. Just like not having an NHL goaltender or Dougie Hamilton for significant stretches this season hasn’t helped matters.

The Devils seem content to play the chain and not make meaningful changes to a group that clearly isn’t working. So no. They don’t deserve better. In fact, they get exactly what they deserve.

What did you think of the last defeat tonight? Feel free to speak up in the comments section below and thank you for reading.