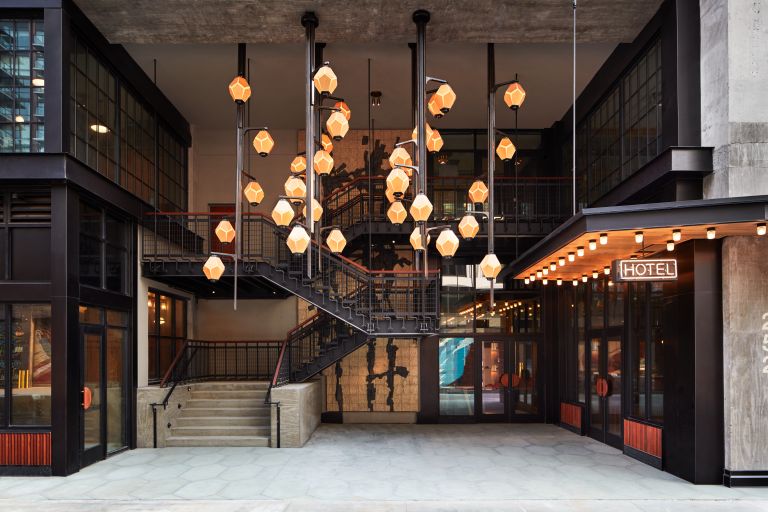 Commercial Observer got a glimpse of the 13-story, 287-room Stonehill Taylor-designed hotel with a poured concrete facade, Roman and Williams interiors, and (of course) a restaurant and bar downstairs.

It has been an interesting week for hospitality. Those who hoped that Brooklyn’s great icon of hospitality, the Grand Prospect Hall (“We make your dreams come true!”) Would be spared the wrecking ball were sadly disappointed by a Decision of the Commission for the Preservation of Monuments.

But hospitality also had good news. The Times Square Alliance told the CO that an average of 211,000 people pass through Times Square each day so far this year, which is more than double the 102,000 anemic figures from last year. This is still (as one can guess) lower than the record number of 2019 (when the number of pedestrians was 380,000 per day), but progress is being made!

Of course, hospitality isn’t just a New York concern. Iconic Miami Beach Art Deco, 42 rooms The Astor Hotel, which was built in 1936 and closed last year, has been recovered by the New Jersey-based Victory Investments Group for $ 12.75 million, with plans for a property renovation.

Additionally, this week we learned that Steve Witkoff and PPG recapitalize Diplomat Golf Club and Residences (which in addition to an 18-hole course also has a 60-key hotel) in Hallandale, Florida, for $ 55 million.

Some properties have gone the other way. In Washington, DC, the Fairfax at Embassy Row has been acquired by a joint venture between Maplewood Senior Living and Omega Healthcare Investors with plans to convert the property into a 174 unit retirement home called Inspīr Embassy Row.

It was also a big week for hires and promotions. Hines announced that it has named Sarah Hawkins CEO of the company’s Eastern Region.

“I have been evolving in this role for three years now” Hawkins told the CO. “We have had two other CEOs in the Eastern region in our 40 year history, so we take transitions very seriously and try to do them the right way. This is something that has happened in a very organic and natural way, and a lot of what I’m going to do is actually a continuation of what I’ve put in place over the past three years.

Speaking of career development, JLL brought in Christine Colley from Cushman & Wakefield to be their new executive general manager in New York.

And, while it’s not exactly a hire, Marisa Lago just landed a pretty good job. President Joe Biden has appointed the director of the New York City Planning Department as Under Secretary of Commerce for International Trade.

One can not deny it, they like it! We are talking about real estate pros and New York Governor Kathy Hochul, sure.

It’s been less than four weeks, but Governor Hochul is off to a good start overall, as far as many real estate professionals are concerned. Many weren’t enthusiastic that she signed an extension to the moratorium on evictions (“Ugh!” John Catsimatidis texted our correspondent), but she also pledged to get 2.7 billions of dollars in federal funds for rent relief. (“She knows she has to do it,” said a hopeful Jeff Gural, president of the owner and manager of GFP Real Estate.) Likewise, she refused to procrastinate by adding names to the Cannabis Control Board and signed a law guaranteeing wages in force for employees of construction services.

A plurality of New Yorkers like Governor Hochul too. Forty-two percent said in a Siena College poll they approved of it, with just 17 percent saying they disapproved. That’s right, 41% said they didn’t have an opinion, but that means there’s plenty of room for his approval count to increase.

There is much more that Hochul will have to face in the near future. New York City Councilor Stephen Levin, for example, introduced a bill to commercial rent control. The favorite subject of all real estate professionals! We’ll see how Hochul and the next mayor handle this.

Politically, this week contained what could have been a major bombshell, the attempted recall of Governor Gavin Newsom, but it turned out to be a big failure. It was always difficult for California to kick a Democrat out of office and maybe replace him with, say, a right-wing radio host, but California is known for his unorthodox manners.

Yet another great election is approaching: the mayor of New York. And the likely winner, Eric Adams, say something this week it was undoubtedly music to the ears of real estate professionals. Adams has an interesting history of interacting with the industry during his days as president of the Brooklyn Borough. What is he talking to us about how he would act as mayor? That’s the question CO asked in this week’s Brooklyn issue.

Brooklyn real estate is actually it is going much better during COVID-19 that many people never expected. Kings County has lost fewer people than Manhattan, office and retail rents have fallen by a lower percentage, and rents are rising even in downtown Brooklyn.

Perhaps this is one of the reasons Atlas Capital Group decided to shell out over half a billion dollars this week for buy Denizen Bushwick troubled all year round project, the 911-unit complex in Bushwick.

Denizen wasn’t the only big deal last week. There were leases all over the country! Apollo plans to take 23,000 square feet at 701 Brickell in Miami. Newsmax has doubled its footprint at 805 Third Avenue in Manhattan. (Apparently Third Avenue is hot. The glassmaker, Verescence, also took up space at 630 Third Avenue.) And video game developer, Riot Games, sublet 131,000 square feet in a Santa Monica office complex owned by Starwood.

And plans have been filed for a half-million-square-foot creative space in Los Angeles called The star in the heart of Hollywood. (Price tag: $ 500 million.)

And there was also the big step. Even though the terms “multibillion dollar deal” and “on the run” were never used in a sentence that also contained the word “Blackstone”, the real estate giant apparently said: “Thank you but no thank you“, on a deal to buy Chinese real estate company Soho China for $ 3.3 billion.

See you next week!