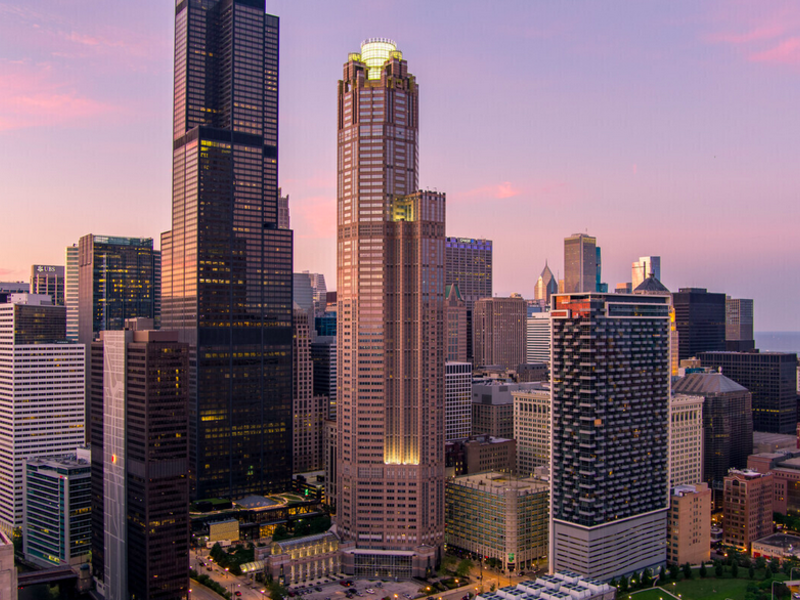 It’s also well below the $120 million that the current owner – a company run by Kinship Capital, the entity that manages the multi-billion dollar investment portfolio of the descendants of pharmaceutical mogul Gideon D. Searle – has wanted for the tower in 2018, when demand for downtown office space was booming and the building was 86% leased.

But the owners never made a deal and are now set to sell the 483,497 square foot property for a significantly lower number in a much uglier market backdrop. The property has lost a string of small tenants over the past two years and is on track to be just 62% let at the end of 2021, according to a flyer from Cushman & Wakefield, which marketed the building to potential investors. This means that the building’s net cash flow will drop, which, combined with the difficult rental climate, will lower the market value of the tower.

The tower’s largest tenant is German insurance giant Allianz, which has a lease for more than 73,000 square feet until March 2031, according to the Cushman flyer.

Kinship paid $69 million in 2010 for a controlling interest in the building through a deed in lieu of foreclosure. The former owners – a joint venture of Anglo Irish Bank and Chicago-based developer Golub – faced imminent default on more than $100 million in loans on the property, which they bought for $100 million in 2005 .

Property records show Kinship financed its acquisition in 2010 with a $50 million loan. The group has spent an additional $35 million on building renovations and rental commissions since then, according to Cushman. Kinship eventually refinanced the property with its current $85 million loan in 2019.

Spokespersons for Kinship and Agave could not be reached.

Agave also owns the 27-story office building at 303 W. Madison St., which he bought in 2009 for more than $60 million, according to property records. This 311,000 square foot building is just over a block south of the Washington Street property that Agave is under contract to purchase.

Among recent deals completed: New York-based Opal Holdings has entered into or is in the process of finalizing deals to purchase a trio of office buildings in the Chicago area, including the 50-story tower at 35 W. Wacker Drive, which he bought for nearly $420 million. .

Cushman & Wakefield’s Tom Sitz, Cody Hundertmark and David Knapp are negotiating the sale of 225 W. Washington St., while Hodges Ward brokerage Elliott is representing Zeller and Cindat in the sale of 311 S. Wacker. CoStar News first reported on the negotiations for the two property sales.

17th Symposium on COVID-19: what have we learned? How can we use what we have learned?