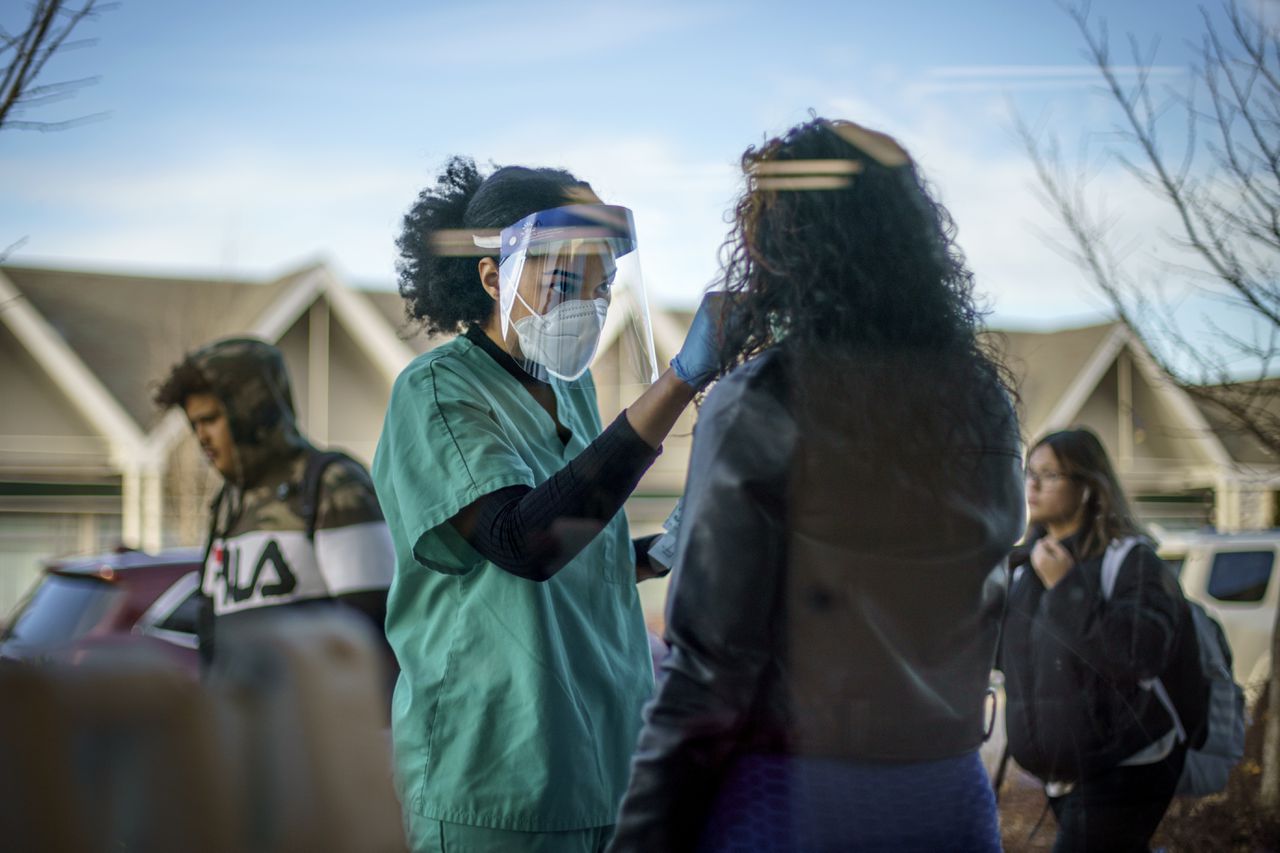 New Jersey reported 32 new confirmed COVID-19 deaths and 8,267 new cases on Monday as the state’s seven-day case average fell and the rate of transmission continued to drop, suggesting the omicron thrust slows down.

At a Sunday afternoon news conference on the winter storm, Gov. Phil Murphy noted that the lower test positivity rate and lower statewide transmission rate are pushing the ‘state in the right direction.

While the state’s seven-day average is down from its Jan. 10 peak of 27,914, it’s still significantly higher than it was a month ago, before the omicron variant spread as families traveled and gathered for the holidays. That’s up 291.85% from a month ago, when the daily case record was still below 7,000.

New Jersey’s statewide transmission rate fell to 1.02 on Monday, a significant drop from Saturday and Friday’s rates of 1.21. The transmission rate has been declining since the state’s recent high of 1.92 on Jan. 1. Any rate greater than 1 indicates that each infected person is infecting more than one other person. When the rate is 1, it means the outbreak has stabilized at its current numbers.

On Thursday, Murphy said the statewide positivity rate remained “surprisingly high.” The rate of tests carried out on Tuesday, the most recent day available, was 23.97%, meaning more than one in five people who were tested had a positive result. The rate had been above 30% since Christmas Day before the recent drop. The last time New Jersey had such high positivity rates was in April 2020, when testing was scarce.

More people continue to get tested, though the number is likely underreported because home testing is not reported to the state. The state reported another 1,155 probable cases of rapid antigen testing at medical sites on Sunday.

Coronavirus deaths have also increased. Peaks in deaths tend to follow two or more weeks after increases in cases.

Daily reports do not reflect deaths that occurred in the past 24 hours, officials said, and reports may be delayed by days or weeks as deaths are investigated and certified. The holiday season may also play a role in these reporting delays.

All 21 counties in New Jersey are listed as having “high” rates of coronavirus transmission, according to the US Centers for Disease Control and Prevention. The agency recommends that all people in counties with high transmission wear masks for indoor public places, regardless of their vaccination status.

There were 623 people released statewide during the same 24-hour period.

State Health Commissioner Judith Persichilli said last week that about half of people recently hospitalized with confirmed cases were admitted with COVID-19 as their primary condition. The others have COVID-19 as well as other coexisting medical conditions, she said.

It comes as some critics have questioned how many COVID-19 hospitalizations in the country are from people who enter hospital with an unrelated condition and then test positive for the virus, inflating the numbers.

But Persichilli said even for those not admitted for COVID-19 as the primary reason, the virus becomes a “contributing or comorbid condition that may or may not worsen their primary diagnosis.”

In the more than 22 months since the pandemic began, New Jersey, an early coronavirus hotspot, has now reported 30,121 deaths – 27,252 confirmed deaths and 2,869 probable deaths.

The state of 9.2 million people has reported 1,731,512 total confirmed cases out of nearly 17 million PCR tests conducted since the state’s first case was announced on March 4, 2020. The state also has reported 272,068 positive antigens or rapid tests, which are considered probable cases. .

More than 6.5 million of the 8.6 million eligible people who live, work or study in New Jersey have been fully immunized and nearly 7.5 million have received a first dose since the vaccine began in the state on December 15, 2020.

Of the 4.95 million people eligible for booster shots, more than 2.5 million have been vaccinated.

Murphy said the number of recalls in the state is lacking and officials will focus on increasing them in the coming weeks.

Anyone 16 and older in the United States who received their second dose of the Pfizer and Moderna COVID-19 vaccines at least five months ago is eligible to receive a booster shot. Anyone 16 and older who has received the Johnson & Johnson vaccine is also eligible for a booster two months after their single injection. In most situations, the CDC said, it recommends Pfizer and Moderna boosters.

The state does not release a daily breakdown of the vaccination status of those who test positive, are hospitalized or have died from the virus.

For the week ending December 26, there were 31,334 breakthrough cases out of 101,000 total positive tests. Those cases resulted in four hospitalizations out of a total of 2,640 and five deaths out of a total of 146 deaths that week.

As of December 26, New Jersey has reported a total of 128,172 breakthrough cases among fully vaccinated people, resulting in 1,687 hospitalizations and 448 deaths, although these represent a small percentage of the total number of cases.

Officials say those vaccinated are less likely to contract the virus and much less likely to develop life-threatening cases. But authorities are asking more people to get vaccinated because the effectiveness of vaccination decreases over time.

Cases among school staff and students in New Jersey jumped by more than 8,700 in the most recent week, according to Department of Health figures that track infections regardless of where transmission occurred.

Since the start of the school year, 109,341 students and 32,292 staff members have contracted COVID-19, though the state has never had more than two-thirds of school districts reporting data in the past year. ‘one week.

The state provides the total number of student and staff cases separately from those considered school transmission, which is narrowly defined as three or more cases linked through contact tracing. New Jersey has reported 388 total outbreaks in schools, including 2,255 students and staff.

There are active outbreaks in 550 nursing homes across the state, with 8,566 current cases among residents and 11,358 cases among staff, according to state data. At least 8,854 nursing and long-term care home residents and staff have died of COVID-19 since the pandemic began.

More than 328.5 million cases of COVID-19 were reported worldwide as of Monday, according to Johns Hopkins University. More than 5.54 million deaths have been reported. The United States has reported the most cases (more than 65.7 million) and the most deaths (more than 850,794) of any country.

More than 9.6 billion doses of vaccine have been administered worldwide.

Please sign up now and support the local journalism you rely on and trust.

Karin Price Mueller can be reached at [email protected].

Get the most out of your hearing