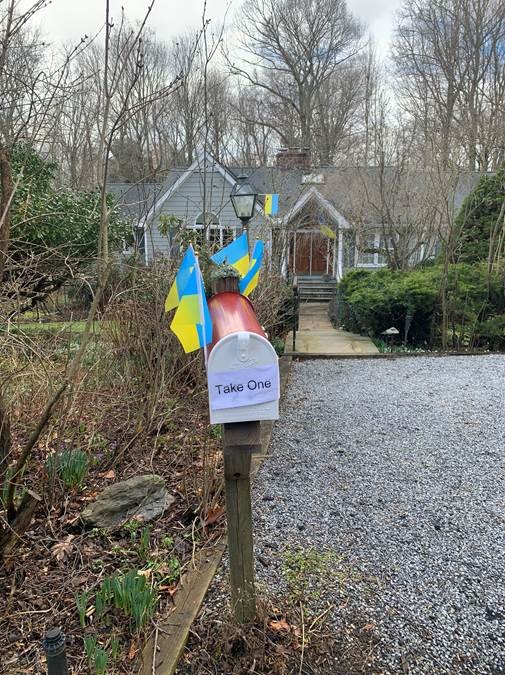 This is indicated by a sign on the door. The location – which opened in September 2015 – has already disappeared from the 2,171-store chain’s website.

Meanwhile, not far away, an osprey has returned to its Fresh Market perch.

Wendy Crowther, reader of the ‘06880’ alert, reported last night: ‘He was preparing the nest as I passed by earlier. I drive by Fresh Market to and from work or run errands almost every day. days. I always look in that direction.

“It’s my first sighting since he went south last fall. I was in my car so I don’t have a photo.

Then the one from last year will have to do:

Like many Westporters, Stephan Taranko has followed Ukrainian news closely.

He has a special interest: his family is from there.

Earlier this month he ordered 50 flags, to be distributed at the Stand With Ukraine rally on Jesup Green.

They did not arrive in time. When he finally got them, he did the next best thing: he put them on his mailbox, with a sign inviting people to pick one up.

Steve lives on a private road near Sturges Highway. Still, all 50 were taken quickly.

The city’s Westporters also decorate their homes and yards with Ukrainian flags. Several line Prospect Road, in a show of support for this brave nation.

The Kiwanis Club is one of Westport’s less publicized civic groups. But they’ve been around for decades, helping with everything from safe rides and local playgrounds to gearing up for the EMS bike unit.

Very discreetly, they continue to enrich our commune.

The other day, they donated $5,000 to Save the Children’s relief efforts in Ukraine. Today, Kiwanis is gearing up for its high school grant program. Funding comes from their annual family mini-triathlon at Compo Beach.

The Kiwanis College grant application is open to Staples High Schools with qualified income who have demonstrated academic excellence and community service. Click here for an application. The deadline is April 15.

The Triathlon is open to all levels. It includes a point-to-point swim at Compo Beach, followed by short biking and running routes through the Compo neighborhood.

The event is ideal for beginners and families who want to run together. To register for the 9/11 event or donate to the University Scholarship Program, Click here.

All will be celebrated this Saturday by Westporter Suzanne Tanner, in her inspirational musical ‘Voices of Herstory’.

We all know how “Romeo and Juliet” ends, right? (Spoiler alert if you don’t: wrong.)

On April 8 and 9 (7:30 p.m. and 2 p.m., respectively; Sacred Heart Community Theatre, Fairfield), you have the chance to change up Shakespeare’s 425-year-old classic. Internationally renowned pianist – and Westport neighbor – Frederic Chiu is a Prokofiev expert. Among his most remarkable works: the piano suite of the composer’s ballet “Romeo and Juliet”.

Twenty-five years later, he commissioned choreographer Sandra Shih Parks to collaborate on “Romeo & Juliet: The Choice”. The audience votes on which ending – Prokofiev’s happy original or the traditional mournful version – will be performed.

It made its Drexel University debut in 2018, with Chiu playing the entire ballet on the piano, while the dancers performed – and the captivated audience awaited the outcome.

Now WSHU is bringing it to Fairfield. Click here for tickets and more information.

In addition to next month’s pop-up thrift store, to buck the trend of unnecessary “fast fashion” shopping, co-chairs Kayla Iannetta and Jenn Cirino are teaming up with Sustainable Westport and ZenWTR for a Compo Beach cleanup on April 30.

This is the first time that all zero waste committees from different Westport schools have come together for a single effort.

ZenWTR is the first beverage in the world to be certified plastic negative (meaning it removes more plastic from the environment than it produces, by investing in sustainable programs). ZenWTR is sold in the Staples High School cafeteria.

Lindsay Rose Rando launched the store 14 years ago in Marblehead, Massachusetts. B&L offers “modern avant-garde designs at affordable prices”. There are other outlets in Rhode Island, New Hampshire and Maine.

Rando says she “loves the sense of community” in Westport and calls her Church Lane location “bright and beautiful”.

We missed the trailer – which features our neighbor touting the charms of his home country. It includes some snaps of his Westport home.

There are a few places left for this year’s Westport Library ‘Reserved for the Evening’ Gala. The June 1 winner is TV producer/screenwriter/author Shonda Rhimes – twice named one of Time magazine’s “100 Most Influential People in the World”.

Earlier this month, “06880” reported that Coleytown middle school students were heading to the state Mathcounts competition.

A follow-up: Vikram Sarkar finished first in Connecticut. He leads the Connecticut team of 4 who will participate in the national event, in Washington. Ayush Rudra finished 9th overall.

Vikram Sarkar, with his award.

While driving down Roseville Road the other day, Bob Weingarten spotted this unusual sight on a tree.

He has no idea what that means. But he thinks at least one reader of “06880” might know.

The first day of spring was Sunday.

Just in time, here is a very spring-like photo for our “Westport…Naturally” series:

And finally… in honor of Frederic Chiu’s late “Romeo and Juliet” (story above):

The public just got their first taste of Murphy’s proposed $48.9 billion budget in New Jersey. Not everyone is happy.