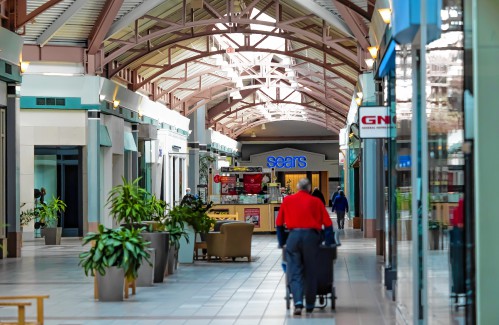 Something new is happening inside the Steeplegate Mall, which explains the confusion over whether Hatbox Theater was going to be evicted.

It turns out the eight-year-old theater and a few other businesses can stay, but five other tenants who can only be entered from inside the mall are asked to leave the nearly empty shopping complex. Hatbox Theater is one of six businesses that have an entrance outside the mall.

“Management has ultimately made the decision to close its interiors in pursuit of an exciting potential project that would include the space currently leased to online tenants,” Jelson Santos, chief operating officer at Namdar Realty Group, the company based in New York. mall owner, said in a statement. “Those with public access will continue to operate as usual as we explore the future of Steeplegate Mall from the inside.

“Unfortunately, we can’t share any more specifics or specifics at this stage, but we look forward to doing so down the line,” Santos wrote.

The news came as a shock to Blue Sky Hair Studio owners Carrie Foote Foote and Becky Carr, who rent a booth from Blue Sky. The salon still had two and a half years left on its lease.

“They sent it to Carrie’s home address. They didn’t even tell us in person,” Carr said. “They’re just morons.”

Foote received a letter on Tuesday advising him that his business would have to vacate its space inside the mall.

Carr said Blue Sky has always paid all of its rent on time, including when the salon was forced by the state to close during the early days of the pandemic. Foote had invested $6,000 in the mall location, replacing floors and paint. “Our roof leaked constantly for the first few months we were here,” Carr said.

“It’s really sad that they treat people who have paid their rent like this, always paid on time and when we could have not paid our rent when they closed us,” she added. “It’s just a really bad deal.”

The jeweler’s workbench is also due to leave the mall, after 15 years inside Steeplegate. Owner Gregg Mezzapelle said he still hasn’t received notice from Namdar. “Maybe they don’t think I’m important,” he said.

“It’s pretty heartbreaking,” Mezzapelle said. “This has been my home for 15 years.”

He wants to find a new location along Loudon Road, avoiding competition from town center jewelers, and he hopes his loyal clientele will take his business past that hurdle.

“It’s kind of the last thing I expected, I know the mall has been crazy and ghost landlords but I didn’t think they were going to throw the stores inside the mall” , said Mezzapelle.

A total of five businesses – Jeweler’s Workbench, Blue Sky Hair Studio, Mt. Everest Goods, The Arch Threading and Spa and Wireless Zone – are inside the mall. While six others, including The Hatbox, Zoo Health Club, Altitude Trampoline Park, Chico’s, Talbots and JCPenny, the latest flagship store, have exterior doors.

The 480,000 square foot mall opened in 1990 with space for approximately 60 stores. More than half of the spaces have been empty for years and three of the four flagship stores are now unoccupied.

On Monday, Hatbox founder Andrew Pinard said he received a letter asking him to leave by March 23. That order was overruled in a phone call with Namdar officials on Tuesday, he said.

It looks like Hatbox received notice of the upcoming changes earlier than some other stores, many of whom said they didn’t hear anything on Wednesday, as well as mistakenly.

The theater will lose access to an adjoining indoor space, formerly occupied by Radio Shack, which it uses for storage and rehearsal.

The announcement comes less than a week after the To watch published an article about the city’s exasperation with the mall owners. Deputy city manager Carlos Baía said they were unwilling to process proposals from the city to redevelop the property.

Namdar had not contacted any city staff prior to the announcement, Baía said Wednesday. “I don’t know what they think about any action,” he said. Baía said the city administration can help foreclosed businesses find available commercial properties, something the city is already doing for business owners who ask for help.

During a discussion of council priorities last week, councilors raised concerns about the upkeep of the mall. Baia suggested that Concord review whether the owners have complied with code requirements and the property’s site plan.

“As a commercial building owner, they have a responsibility to make sure their site is up to code, that their site plan is up to approvals, those are obligations they have. If they have code issues and site issues, those are issues that we’re going to look into carefully,” he said on Wednesday.

What a trap! New Jersey receives millions for fishing